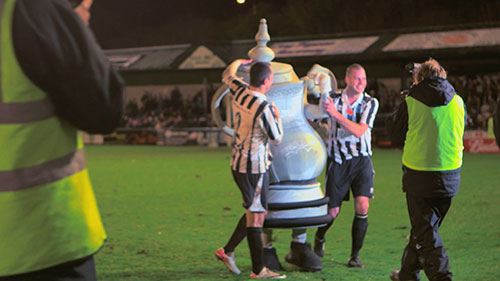 A film created for non-league football clubs in the UK to increase safety standards, specifically focussing on the role of stewards.

Having created all the film content for the steward training resource ‘On The Ball’, which was jointly commissioned by The Football Association, The Premier League and The Football League, the F.A. wanted a version that was more appropriate for those clubs outside of the football league system who didn’t have the infrastructure and resources available to the bigger clubs, but still faced many of the same challenges.
‘Managing a High Profile Match’ is an observational documentary film that goes behind the scenes of the stewarding team at non-league Dorchester United as they take on Plymouth Argyle in the F.A. Cup.

Some examples of the filmed content created for ‘On The Ball’ can be seen below, covering topics such as Conflict Management, Stadium Safety and Customer Service.

Service with a Smile

Look Before You Leap: Part 2